Projects in the Park 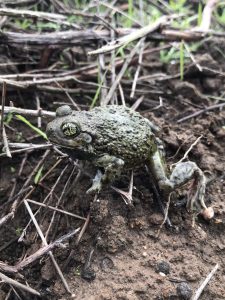 In partnership with the Natural Communities Coalition, State Parks will be undertaking an innovative restoration project that will result in increased breeding (and foraging) opportunities through the construction of 8 small seasonal pools and habitat restoration of 10.48 acres of adjacent upland California sage and cactus scrub habitat in support of the recovery of the western spadefoot (Spea hammondii) and other “Identified” and “Target Species”, such as the coastal cactus wren (Campylorhynchus brunneicapillus). Seasonal pools will be constructed to extend the capacity of select locations in the San Joaquin Hills, which are used by western spadefoot for breeding, to capture and hold a greater volume of water for longer durations following natural rainfall events each winter than existing pools. Historically, spadefoot used vernal pools for their breeding and reproduction, but most of the vernal pool habitat across southern California has been lost due to agriculture and development.  Metamorphosis of spadefoot larvae requires pools to hold water for more than 30 days during the breeding season, though they can benefit from hydroperiods as long as 80 days. The pools will not hold water for most of the year, which would exclude invasive amphibians like bull frogs. The focused areas of restoration have been chosen based on past observational data of spadefoots and to help facilitate dispersal of spadefoots from known breeding locales, including road ruts. The restoration of the surrounding area will create high quality upland habitat for adult spadefoot toads. USGS will monitor these sites for spadefoot activity with the goal of documenting spadefoot use of one of the constructed ponds or the detection of a spadefoot egg mass. 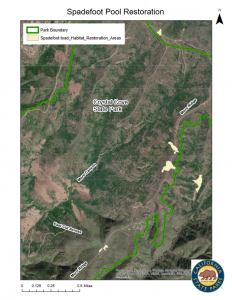 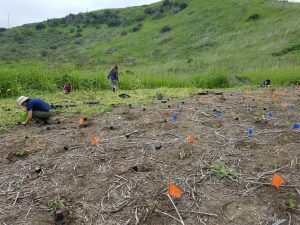 How can we restore a sustainable coastal sage scrub community? California State Parks is partnering with UC Irvine scientists and Crystal Cove Conservancy educators to identify the most cost-effective way to restore grassland and coastal sage scrub plant communities in disturbed areas like “The Bowl,” an area of Moro Canyon about a mile in from the coastline within the backcountry of Crystal Cove State Park.  Many areas of Crystal Cove State Park have a long history of land use and disturbance, including agriculture using tilling methodology as well as cattle and sheep grazing. Based on the soils in this area, State Parks believe that it was originally a mosaic of native California grassland (GL) and coastal sage scrub (CSS).  Today, coastal grasslands are one of our fastest disappearing habitats due to development, fire, and other human-caused disturbances and yet are one of the most challenging, expensive and unsuccessful restoration targets. 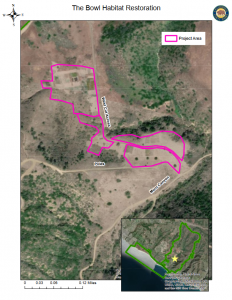 Because of the intensive land use within The Bowl, black mustard, artichoke thistle, and other highly invasive weeds have benefitted.  They took over the area, out-competing the native grasses and shrubs and left a legacy of altered soil chemistry, fire regime, and seed bank.  This reduced the biodiversity and resilience of the local plant community, taking food and shelter away from native wildlife. Several restoration strategies have been tried over the years with limited success including targeted weed control/natural recovery, soil salvage, prescribed burning, seeding and container planting, among others.

State Parks started this project in 2017 and the current phase of this project will sunset in June 2021. State Parks is currently seeking additional funding to implement “Phase II” of this work, expanding lessons learned from this experiment to the larger watershed of the bowl and restoring more acres of habitat. 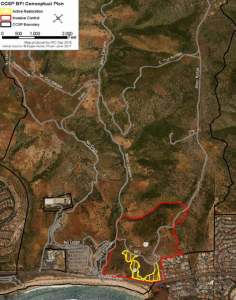 California State Parks has partnered with the Irvine Ranch Conservancy to restore an area off of the BFI trail in Crystal Cove State Park. 7.5 acres of habitat will be actively restored with an additional 95 acres of targeted invasive plant control in the surrounding watershed. This work is funded by Orange County Waste and Recycling (OCWR), which is seeking mitigation credit to develop a closed landfill site in nearby Huntington Beach. Work began with planning and permitting efforts in 2019 and will continue through 2029.

The 7.5 acres of active restoration will be focused in areas dominated by weeds like black mustard, Mediterranean grasses, and tocolote and will knit together patches of high quality habitat throughout the project area. Most areas will be restored to coastal sage scrub habitat, with California sage brush (Artemesia californica), bush sunflower (Encelia californica), coastal prickly pear, lemonade berry (Rhus integrifolia), coyote brush (Baccharis pilularis), and coast goldenbush (Isocoma menziesii)as the dominant species. Other smaller areas will be restored to a grassland

Some of the benefits of this project include higher native species diversity; increased habitat for the California gnatcatcher, listed by the USFWS as threatened in 1993; increased habitat for the coastal cactus wren, another sensitive species and target for OC open space management; sensitive plant enhancement; closure of damaging unauthorized trails; and improved aesthetics.

Both the California gnatcatcher and the coastal cactus wren have seen declines due to habitat loss and fragmentation. Both species occur in the park, with CAGN rebounding significantly since their listing and many acres of coastal sage scrub habitat restoration. CAWR rely on slow-growing cactus stands to protect their nests, most of which burned in the 1993 Laguna Fire. Cactus plantings within the CSS restoration and along the edges will help create future additional nesting and foraging habitat for CAWR.

Plants considered rare or sensitive per the California Native Plant Society rare plant ranking system will have seed collected from the park and either propagated to be planted within the restoration areas or directly seeded in. This will further protect local sensitive plant populations by creating new populations in appropriate areas of the park, reducing vulnerability of species occurring in some of the more dynamic coastal environs.

The attractive coastal vistas from the BFI trail have tempted many to wander off trail. Unfortunately, this has led to degradation and trampling of many sensitive resources. The restoration of these weedy areas will create more of a physical barrier, preventing visitors from straying off trail. Temporary fencing will help reinforce the trail edge while plants grow in.

This project has a long timeline with varying levels of activity. Initial site prep will occur for one year, and will involve mowing and raking of thatch. Active seeding and planting coupled with weeding will occur over the next several years, and the last few years will involve maintenance weeding activities.