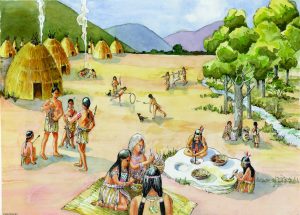 The coast of southern California was occupied for up to 9,000 years before the arrival of the Spanish missionaries in 1769. Crystal Cove State Park lies within the territory historically occupied by the Gabrielino (Tong-Va) and Juaneno (Acjachemen), both speakers of Uto-Aztecan Shoshoenean languages. Native people of this area established their villages near dependable sources of water as they set out on seasonal gathering and hunting trips. Their food sources included fish from the kelp beds and surf zones, waterfowl, and a variety of plants and animals. The period between about 3000 and 1350 BCE is characterized by the first appearance of the mortar and the pestle, associated with the processing of acorns. These communities developed a number of specialized crafts and tools, including nets, fishhooks, basketry, stone implements, ritual objects, and tule canoes.

For most of the year the Gabrielino and Juaneno occupied village sites in large domed circular structures thatched with tules or ferns.  Like the Chumash to the north, they used large, wooden plank vessels called tomols to travel to the Channel Islands and to exploit deep-water marine resources. To learn more about the culture of the native people and to take a look at some replicas of items used by early residents of Crystal Cove State Park stop by the Visitor Center located at the Ranger Station, open daily from 7am to 4:30pm. 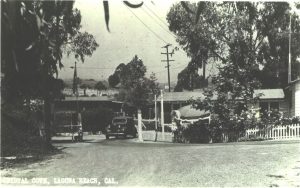 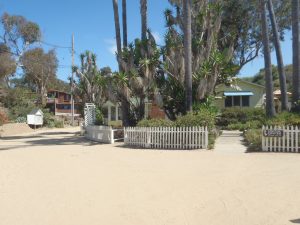 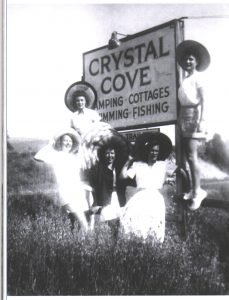 This collection of 46 historic cottages and associated landscape features, strattling Los Trancos Creek and nestled along the coastal bluffs of Crystal Cove State Park makes up the 12.3-acre “slice of paradise” known as the Historic District.  Listed on both the National and California Registers of Historic Places this painstakingly restored and rehabilitated historic property now serves as one of the most popular visitor destinations in southern California.

Its historical significance is related to its status as one of the last intact, self-contained 20th century coastal recreational communities. Originally part of the massive Irvine Ranch, company workers, Irvine family friends and local plein air artists began to visit the remote coastal spot in the early 1900s.   Early movie companies also recognized the Los Trancos area’s potential after World War I, and are credited with planting much of the tropical vegetation that established its unique cultural landscape.  The Cove became a popular vacation location when access via the newly opened Pacific Coast Highway connected Laguna Beach with Corona Del Mar in 1926. In that year the location was renamed “Crystal Cove” by the Irvine Company’s original site managers—who were also motion picture location scouts—resulting in numerous early silent movie filmings.  With its planted palm trees and its thatched-roof cottages, Crystal Cove suggested an exotic tropical oasis in the South Pacific—perfect for both filming or recreating.

Soon returning visitors enchanted with the cove obtained annual “leases” to reserve their favorite spots.  Early tent cabins eventually morphed into more permanent, but clear vernacular cabins and cottages.  By 1939 there were over 40 cottages under annually renewed leases.  Most of these rustic cottages were used for weekend and summer homes.  It was these annually-returning lessees, along with seasonal tent campers on the beach that created the unique seaside recreational community of Crystal Cove.  The Historic District’s restoration and period of significance harkens back to that heyday period between 1935 and 1962 (when day use and beach camping ended), offering park visitors the chance to interact with an authentic representation of this last example of coastal Southern California history.

Of the 46 original cottages, 29 have been restored and historically furnished to reflect the vernacular architecture and lifestyle of the historical period.  Currently 17 of these cottages are available to reserve as overnight rentals through www.reservecalifornia.com. The Visitor’s Center and a community area known as the Education Commons, display cultural artifacts and exhibits bringing the cove’s historic period to life. Nearby Cottage #46, located at the mouth of Los Trancos Creek, houses a monthly rotating exhibit. Cottage #13 celebrates the Historic District’s cinematic history as a coveted filming location from the days of the silent films to modern blockbusters such as 1982’s Beaches. Today one of the cottages has been restored into a highly popular beachfront restaurant. Whether you are enjoying a meal at the Beachcomber Cafe, admiring local plein air artwork in the interpretive store, or simply walking amongst the cottages and historic landscape along the sand Crystal Cove State Park’s Historic District offers a chance to experience a former time and place perfectly set into its serene natural environment. 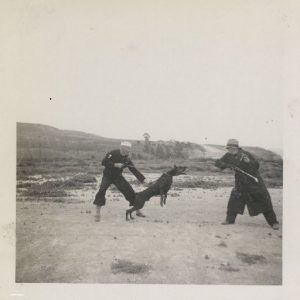 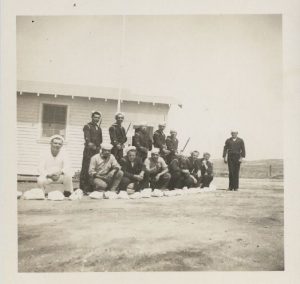 Crystal Cove State Park, similar to California and the nation, was significantly affected by the United States participation in World War II.  Upon the U.S. entry into the war after the Japanese attack on Pearl Harbor, Hawaii on December 7, 1941 civil and military defense efforts were immediately put into place.   Former cottage residents recalled civil defense activities and measures such as required “blackout curtains” for the cottages along with beach closures, armed patrols, and gas and materials rationing that limited their abilities to visit and enjoy their cottages and the Cove.  In the furor and fear of a possible Japanese military attack on California, the resident Japanese-American farming families who had made their homes farming leased Irvine Ranch lands since the late 1920s were removed and sent first to relocation centers, then to internment camps for the remainder of the war—never to return to their Crystal Cove farms—thus ending a brief but prosperous residency here.  In the meantime, the U.S. Coast Guard established armed patrols of the southern California beaches.  Here the Coast Guard refitted the former Japanese Community Schoolhouse (now Cottage 34) for their local headquarters to oversee these patrol activities.

In addition the Cove was added into the U.S. Army’s Coastal Defense system.  Under the jurisdiction of the coastal defense command assigned to Fort MacArthur in San Pedro, a site at the south end of today’s park, above Abalone Point was established as a Fire Control Station (FCS) on land leased from the Irvine Ranch in April 1942.   Fire Control Stations were used to assist in the siting of enemy vessels and directing artillery fire from coastal batteries.  Military planners identified this spot as the southernmost fire control station for the Fort MacArthur command.  This station was established also in support of a newly proposed artillery battery at Bolsa Chica as well as for Fort MacArthur. With a visual arc range of 180 degrees, military personnel within the FCS would have been capable of detecting approaching sea vessels from as far as 31.5 miles away. Information would then be transferred by phone or radio to base headquarters at Ft. McArthur near San Pedro. By triangulating target distance, speed and direction with other stations, headquarters could then authorize strategic firing from coastal artillery batteries at the detected enemy vessel.

Construction of the mostly subterranean and camouflaged concrete-walled Abalone Point FCS began in early 1943, with work stopped in November 1943.  Due to the U.S. victories in the Pacific in 1942 and 1943, the priority for completing all of the new coastal defense facilities in southern California waned, with the program formally stopped in January 1944.   Although the majority of the Abalone Point FCS’s physical structure was apparently completed, there is no documentation of it being equipped or manned.   In 1950 the military reportedly buried the FCS structure and returned the property to the Irvine Company.   Currently State Parks cultural resource specialists and consultants are undertaking historical research and planning in order to properly determine the appropriate preservation treatments and interpretation for this significant historical site and the Park’s World War II story. Although this FCS never engaged in any documented military action, it is an important historical site representing a time  in American history when both our military and civilian communities rallied to the cause of national security and defense, and it reflects Crystal Cove’s role in the greater story of World War II. 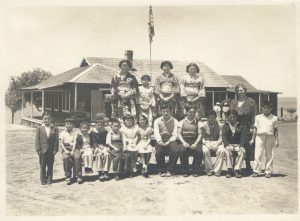 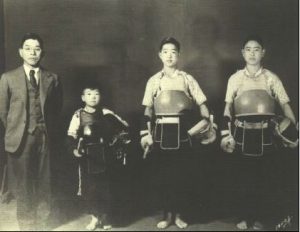 Crystal Cove State Park was part of the greater Irvine Ranch property in the 1920s and 1930s. During this time, Japanese farmers cultivated vegetables on the inland side of Pacific Coast Highway and sold their produce from roadside stands and to Los Angeles markets. Crops included celery, peas, tomatoes and beans. Today’s Cottage 34 in Crystal Cove State Park’s Historic District was built in 1934 to serve as a Japanese community schoolhouse. Although children from the local farming community spent their weekdays at public school, they spent Saturdays in the community schoolhouse attending Japanese language courses and other activities. The “schoolhouse” became a bustling cultural center hosting Buddhist services, kendo demonstrations, and social gatherings. For some 15 years these Japanese tenant farmers enjoyed a period of success and stability. This short-lived time of prosperity ended abruptly in 1942 after the attack on Pearl Harbor and America’s subsequent entry into WWII. Following these events Japanese Americans were sent to internment camps, their homes and property left behind.

The Community Schoolhouse building was sold and moved to its current location in the Crystal Cove cottage community. During the war it was used by the US Coast Guard beach patrols. After the war its owners re-occupied it as a recreational cottage. Today Cottage 34 acts as a meeting space for interpretive and educational programs atop the bluffs of Crystal Cove State Park. Come visit Cottage 34 on the Observation Deck alongside the Crystal Cove Beach Cottages Check-In Office (Cottage 35) to learn more about this unique historic community center. 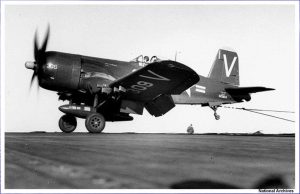 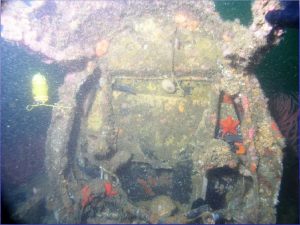 One of the artifacts found under water at Crystal Cove State Park is a sunken F4U Corsair fighter-bomber that crashed off Crystal Cove during a routine Naval training flight on July 5, 1949. After experiencing engine trouble Lt. William H. Anderson, a naval reserve pilot stationed at Los Alamitos Naval Air Station managed to land the aircraft before it sank into the ocean. Lt. Anderson escaped from the wreckage and was eventually rescued from the water by a nearby fishing boat. F4U Corsairs are airplanes primarily known for their success as fighter-bombers in WWII combat missions in the South Pacific. The Corsair found in the Crystal Cove State Marine Conservation Area is well preserved, despite some damage to the tail. Both wings are largely intact with instrument panel outlets, rudder controls, and cockpit wiring identifiable. There are reportedly only around 90 Corsairs left in existence, making this sunken aircraft a fascinating historical artifact and an exciting underwater feature. 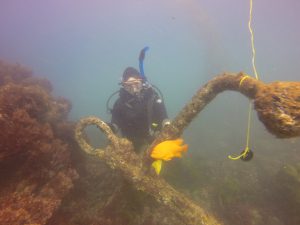 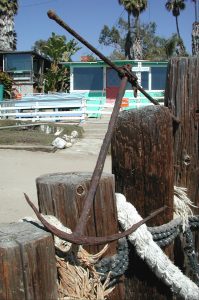 Two of the anchors are preserved in-place in shallow water accessible to exploration by divers.  One is located just west of Muddy Creek and the other at the west end of Rocky Bight, near the Historic District cottages.  Both are 8-10 feet in length and weigh about 2,000 lbs.  They are folding stock “Admiralty style”, typical of California maritime history, and so named because they were developed by the British Admiralty in 1841 in a new design that allowed the anchor to be folded and stored more efficiently on ships.  They would have been primary anchors used aboard sailing schooners and later by steam ships sailing the coast.  The Muddy Creek anchor was recovered in Newport Harbor in the 1970’s and was displayed at the Harbor Department office entrance for many years.  The Rocky Bight anchor was found in San Francisco Harbor by CalTrans and transferred to the park in 2003.  They are both preserved at the park in seawater for long term conservation as well as for the opportunity to share them as submerged historical artifacts in their seafaring environment.

The third anchor is much smaller and is known as a “kedge anchor”, from the same time period.  Kedge anchors were used for secondary purposes such as repositioning ships and boats.  This anchor is preserved at the park’s visitor center in the Historic District at cottage #00.  It was found in shallow water off Crystal Cove the 1960’s by a diver who later returned it to the park for everyone to enjoy.